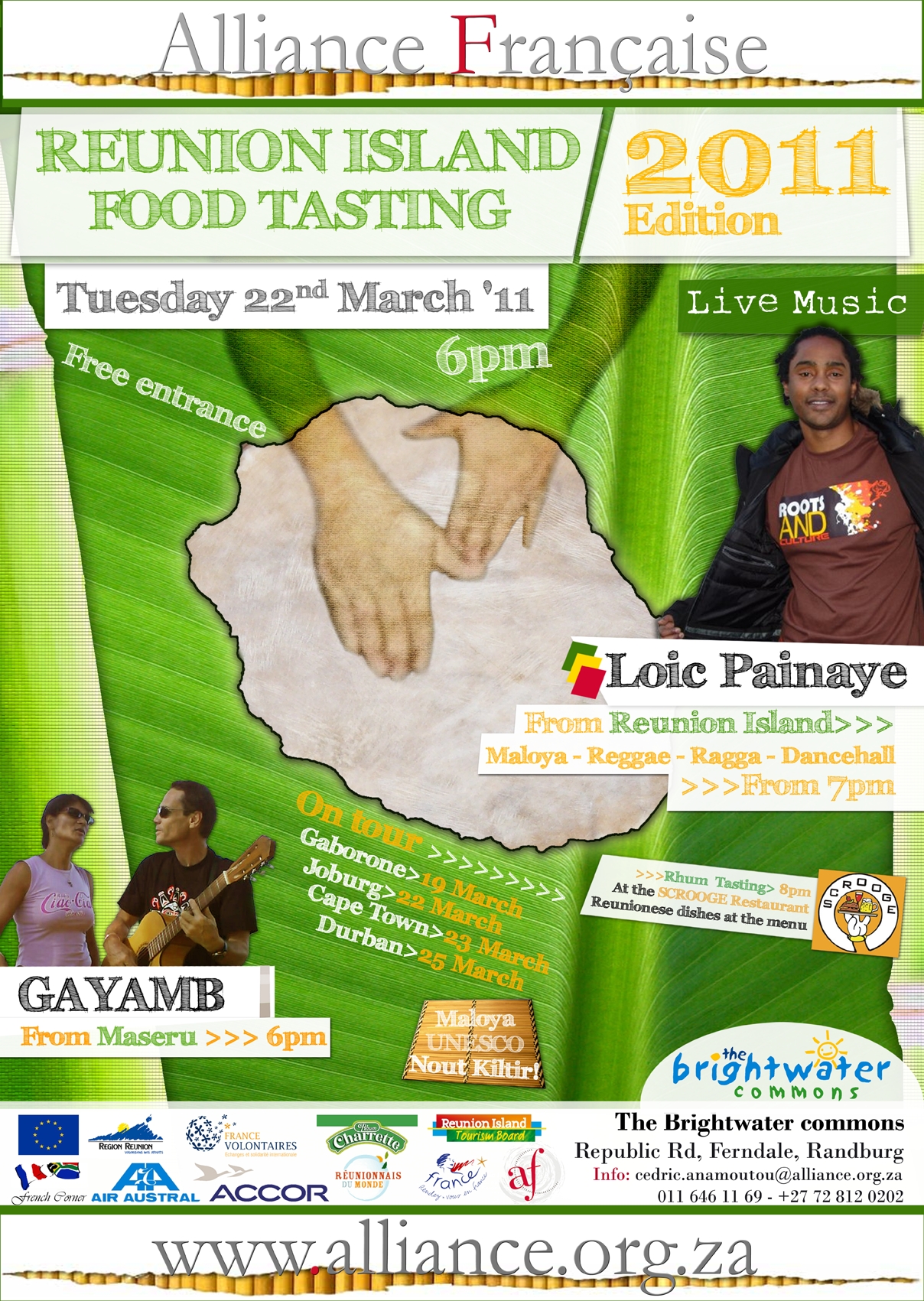 On Tuesday 22nd March 2011, from 6pm, Johannesburg will vibrate to the exotic rhythms of Reunion Island music along with young Reunionese singer Loic Painaye and his guitar. This event will also form part of the many celebrations for the inscription of Maloya, the traditional music of Reunion, to Unesco as Intangible Cultural Heritage of Humanity. Along with Loic’s show, there will be a food tasting with the finest delicacies of Reunion Island with tasting of the most popular rhum which is “Rhum Charette”.

With the importance of being « green » foremost in our minds, the event will be a culinary comparison between the different countries which have influenced local Reunion cuisine, whilst examining the progress made in the field of sustainable development and the ecology. Reunion has 250 species of different and unique plants…

40% of the island has been declared part of UNESCO’s World Heritage. The Maloya, the traditional music and dance of the island, is part of this rich heritage.

« Reunion Island Food Tasting 2011 », more than simply being a showcase of the culinary heritage of Reunion, will offer a general overview of the main challenges faced today by the island, as well as underlining all its valuable qualities that makes it an unforgettable destination.

In the Creole of Reunion, this expression means « Notre culture » in French and « Our Culture » in English. This is the ideal opportunity for us to explore the rich and diverse cultures of Reunion Island.

For the first instalment of RIFT in 2010, we had the pleasure of having Guy TECHER, trainer chef at the Centre for excellence in catering (CENTHOR) keeping us company in the kitchen. In 2011, Marie Christine, chef at the French corner, will be preparing dishes and culinary surprises typical of the Island of Reunion. Some of the products used in the dishes will be imported from reunion Island.. The spotlight will be on Reunion cuisine and the different products of participating partners – this is an opportunity to introduce the qualities of Reunion, of which little is known by the general South African and even wider public.

We will make use of different forms of media – video, images and sounds in order to offer a holistic representation of the island and to allow guests to fully appreciate and discover what the Island of Reunion is truly like. Recipes will be made available which will enable the guests to add completely unknown elements to their kitchens – some Creole flavour and spice !

Some of these products can be found in South Africa, and others will be imported depending on seasonal availability. Among these, the Jacques, Vacoas as well as the combava will be imported from Reunion. 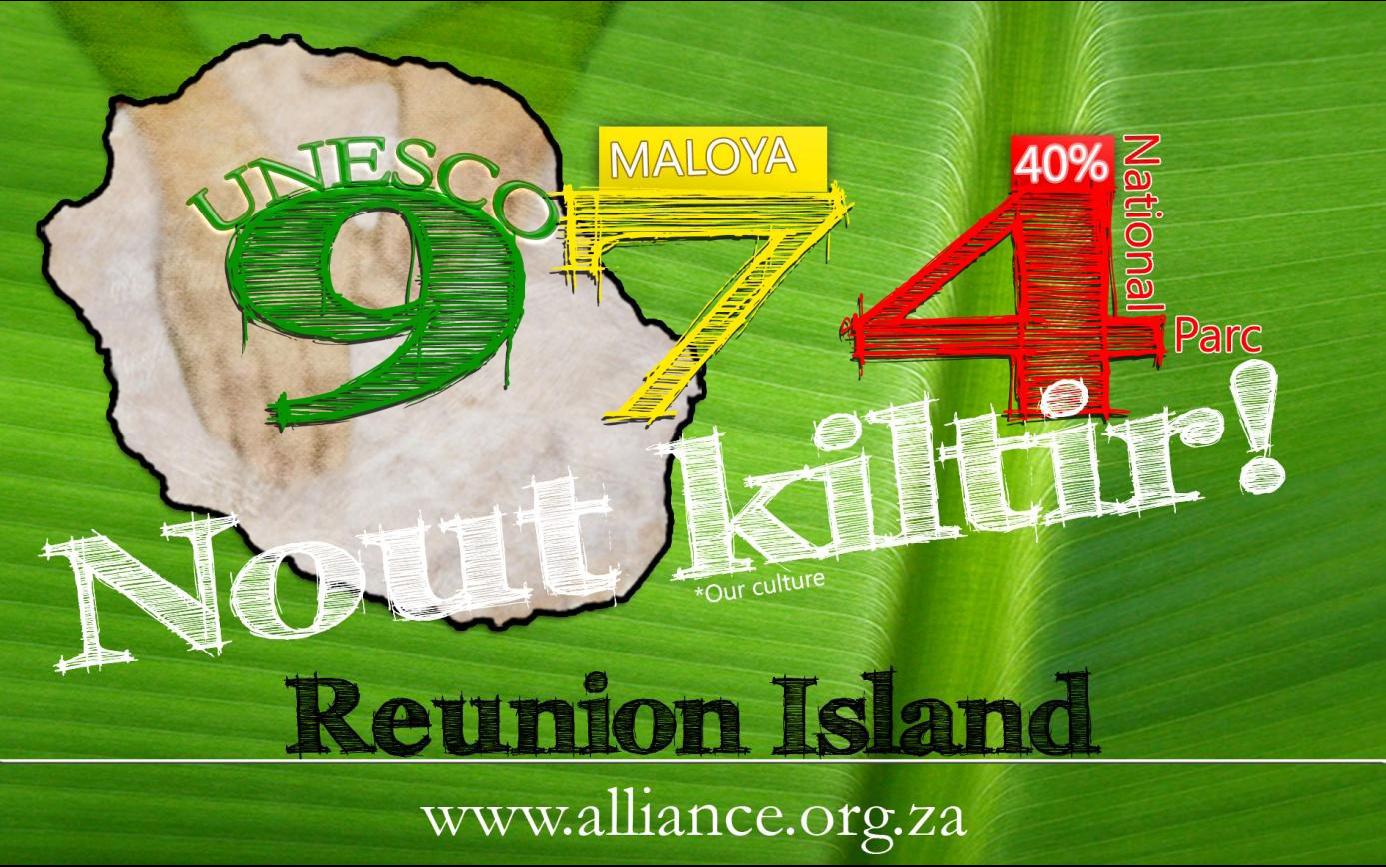 This young artist from Reunion became known to the general public during the Sakifo musical festival in 2007. He sings and strums on his guitar. He’s calm, Creole and 100% Reunion. With his band, Loic Painaye manages a marriage of Maloya, Reggae, Ragga and Dancehall, with some elements of Jazz and Soul thrown into the mix. It is our great honour to have this young artist lending a musical note to the food festivities.

►To leave a lasting impression of Reunion Island in the minds of South Africans and francophones ►To facilitate the discovery of a different side of Reunion cuisine by using local Reunion products ►To increase awareness of the importance of Reunion (UNESCO World Heritage) ►To promote Reunion music through a young artist (Loic Painaye) and to use of the food tasting event as a forum to meet professional partners (music, catering, and tourism etc.). ►To increase awareness with citizens of the Island about the event RIFT 2011 by increasing their interest in South Africa through the bias of local media. (Waiting for agreement)